You haven’t experienced the Great White North until you’ve sawn blocks of ice side-by-side with the elements and an Inuit igloo expert. 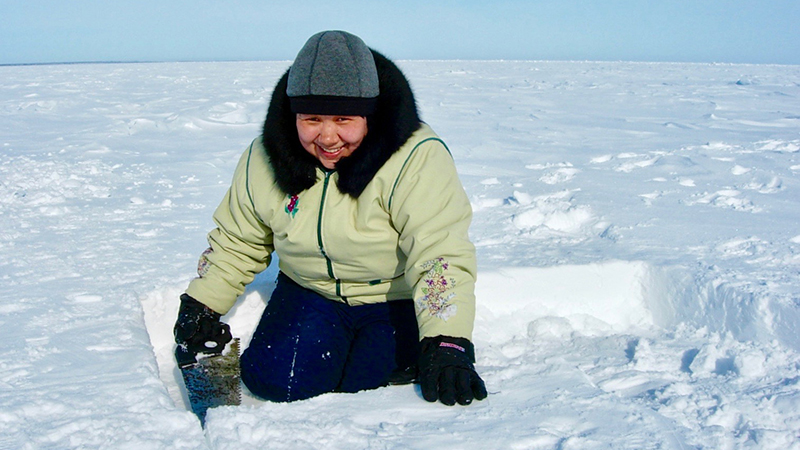 Amy Rosen
As architectural and engineering wonders, igloos use one of our best-known renewable resources—and there’s lots of it.

“Not too soft, not too hard,” is how Joseph gently describes what he’s looking for as he pokes a slender copper pole into the frozen southern shores of Hudson Bay—a two-hour dogsled trek from the Manitoba town of Churchill (three bars, five restaurants, five motels and a friendly post office that will stamp your passport with an inky polar bear). “You have to be able to saw the snow and it still must hold together as a solid block,” he explains.

We’re trudging through deep snow and frozen aqua-coloured tide pools (along with Joseph’s wife, Mary, and puppy, Melot) in the Canadian transitional zone between tundra and boreal forest, where the view is nothing but vast expanses of blue and white (sky and snow), translating into a stark, icy beauty that almost brings a frozen tear to the eye.

Joseph and Mary (the Inuit favour biblical names) are guest instructors this week at the cozy Dymond Lake Ecolodge. This is our home base for great hospitality—fresh-baked cinnamon rolls, almond-crusted Arctic char, red wine and caribou soup, plus snowshoeing and snowmobiling outings. I’ve managed to spot moose, Arctic hare and the snow-white, furry-footed ptarmigan—a kind of grouse. We happen upon some hunters who have just had their way with a bunch of ptarmigan near the lake and are going to “pluck ’em and fry ’em up in a pan.”

Another day we catch a glimpse of the Hudson Bay Quest—a 400-kilometre dogsled race that takes place in the barren tundra between Arviat, Nunavut and Churchill, Manitoba, each year, in which both city dwellers and traditional Inuit racers submit to a punishing three-day race. We meet a 75-year-old dressed head to toe in caribou skins resting with his dog team—a picture right out of National Geographic. Unfortunately, my camera is frozen. The eventual winner is a 20-something from Saskatchewan.

Churchill is known as the “polar bear capital of the world,” owing to the high concentration of big furry beasts there and the fact that spotting a polar bear is an almost daily occurrence. But today there are none to be seen—even though every cabin is polar-bear proofed and every local has dozens of close-encounter stories. Gypsy’s bakery (now closed, unfortunately) had to replace the front windows after a bear crashed through one evening with a hankering for some blueberry pie.

It’s almost springtime, so for now the bears are out on the farthest reaches of the ice, hunting seals.

No matter, I’ve got other things on my mind: It’s –40° C, for one, and I am wearing seven layers of clothing, including three jackets and four pairs of pants (a personal best). And for another, I’m about to make my very first igloo.

Amy Rosen
“You have to be able to saw the snow and it still must hold together as a solid block,” Joseph says.

“Most hunters sleep in igloos because they hunt and travel. A small one takes about an hour to make."

Tools of the Trade
A traditional snow knife (Inuktitut: pana) would be made of wood and caribou antler—or way back when, of whale bone.

Igloo-building 101
In case you don’t already know, igloos are mostly built in the central Canadian Arctic, usually far out on the winter sea ice, and provide temporary shelter—two to three days, give or take—for a single hunter or small group.

Today the snow is quite shallow by the tidal shore, so we slice the blocks longer and shorter than would be the norm. But it is a good spot, as “the snow is warmer here,” explains Joseph, “because the ice is made of salt water. It protects it. More windproof.” He says that when he travels “up north” (he and Mary live in Repulse Bay, about 800 kilometres north of here, so Churchill is akin to a beach vacation for them), he wears a canvas parka so that the snow sticks to it. “When I asked my mom to make me a traditional parka, she made it out of canvas because with the snow, it’s the best insulation.” Which is the same logic behind this igloo we’re about to build.

While organizing the build, Joseph and Mary briefly speak Inuktitut. “Do you mind if we speak our language for a moment?” Mary asks. With a suitable spot agreed on, they revert back to English and Joseph draws a perfect circle around himself with the business end of that copper pole and we all set to work. “Even today, most hunters sleep in igloos because they hunt and travel,” Mary says. “A small one takes about an hour to make.”

When they’re finished building, modern hunters plop a Coleman stove in the middle of their snow domes, which they use to cook and stay warm. Back at the lodge, Mary had shown me a traditional floor lamp, a saucer-shaped vessel fashioned from carved stone, filled with burning seal oil.

We start to saw out snow blocks with an all-purpose handsaw. The blocks are as firm as cement but a little lighter, at about 20 pounds each. “We’ll start with 10 and use about 30 in the end,” Joseph says. Mary and I set to work sawing and dragging, while Joseph has the equally taxing job of lifting and constructing.

The Quick Lesson
First, saw your short ends, then saw straight lines lengthways to get your outline. Get under there with the saw and carve out the bottom in a perfect horizontal slice. (Note: This is where you are most likely to go wrong. Do not angle the saw.)

Go back and reslice your lines, paying special attention to those corners—they tend to stick.

Once you’re relatively confident that your block is loose, angle the saw under the centre of the snow brick and, using leverage and moxie, hoist the brick up and out (four hands are better here than two). The bricks should be solid enough to be carried without breaking by their own weight.

Large blocks are used at the base of the dome, smaller ones at the top. A thickness of 15 to 30 centimetres is good, and the blocks can be made extra strong by setting them up to harden in the wind for a spell.

As I slice away, Mary encourages me: “You’re better at this than our people!” I can’t tell you why, exactly, but this ranks as one of the proudest moments of my life. I’m busting with Canadian pride and have unearthed yet another useless talent (I also happen to be an excellent pogo-sticker).

We shove the first blocks over to Joseph. He begins carving them with a snow knife, angling and pressing the blocks together in what could best be described as snow geometry. The edges of each snow block must be smoothed and correctly angled to make strong bonds with adjacent blocks. There are cracks between the blocks for now, but that will be fixed later. Joseph takes special care to make sure the bottom row of snow blocks are placed aslant, as he’s building a dome, not a tower.

Make Your Own House
“My parents first met in an igloo,” Joseph says. “My grandfather arranged their marriage. They met in the igloo, but my mother’s parents didn’t like my dad so said no to the marriage. But she disobeyed them and they ran away with his dog team.” Back then they didn’t have houses at all, he explains. “They had sod huts in the summer and igloos in the winter.” It wasn’t until the 1960s that simple wood houses started popping up in their hometown, where today Joseph is a talented soapstone artist and handyman. Mary teaches traditional sewing at the local school, where she is also a cleaning woman. When Joseph goes hunting with their sons, they still sleep in igloos.

Joseph is excited to be in Churchill and is particularly excited by the tree line. He’s taking loads of photos, even though the trees aren’t really much to write home about—mostly dwarf spruces and shrubs. But there are no trees at all where he comes from: “At home it’s just white, flat, rocks, grass.” He remembers the first time he saw a tree and the first time his son saw a tree. Both had the same instinct: They climbed it.

A traditional snow knife would be made of wood and caribou antler—or way back when, whale bone. Today, Joseph is using a small machete he bought at the Co-op store in Repulse Bay. The thickness of the snow blocks is key in making a successful igloo: “I cut those ones too big,” Mary confesses after a brief Inuktitut tête-à-tête with Joseph. “If the top ones are too thick, the igloo will cave in.”

Together, we work our way around the circle; the inside is sliced and sawed into blocks, leaving the hollow to become the home. It’s hard work, but it’s good work, and after about an hour, Joseph finishes by packing open crevices with snow, cutting a horseshoe door out of the front (to be covered later with a caribou hide) and slicing an air hole out of the top.

That night, we lay caribou hides down, covering the snowy floor, and place a candle in the middle. That wee twinkle illuminates the dome like a snowball packed with fireflies. Up through the smoke hole the northern lights are in full bloom, prancing across the sky like sheets of flinty gauze, their colours muted—just mellow greens and sheer whites. I see a single shooting star.

Mary loves sleeping in the igloo: “So cozy, with the skins on the ground and the sleeping bags. And in the morning you wake up and it’s so white and pretty and your tea is right in the middle, waiting for you.”

Making the Trip North
Find more information about all there is to see and do at Dymond Lake Ecolodge at Churchill Wild. 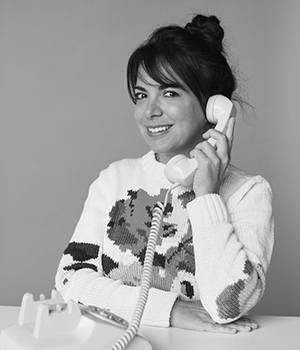 Amy is a James Beard–nominated, award-winning journalist. Previously, she was food editor at Chatelaine and Canadian House & Home. She has written five cookbooks and is the owner of Rosen’s Cinnamon Buns.