Photo: Cobblestone Freeway
A wedding unveils the unique heritage of highlanders in the Hutsul region of the Carpathian Mountains in southwestern Ukraine.

Up in the rolling and remote hills of southwestern Ukraine, I get intimate and interactive with the colourful Hutsul culture.


We’ve begun the dancing, axes in hand, but the night is still young.

Earlier, we wound our way through these hills, chasing the last remnants of the day, evening fading away, the cold just creeping into the air. We arrive at a cozy little home set at the top of a rise, the undulating landscape rolling away in all directions. A young family, Yaroslav and Svitlana and their two kids, welcomes us inside, a fire crackling in the kitchen, the table laid with a spread of bread, sausages and steaming borscht—and, of course, plenty of vodka. We’ve consumed healthy amounts of each by the time we don the costumes.

I’m in the remote reaches of the Carpathian Mountains, which rise in the southwestern corner of Ukraine. The area is home to the Hutsuls, a culturally distinct people who speak their own dialect and hold fast to traditions that stretch back centuries. Travelling with a small group and a hyper-local tour company called Cobblestone Freeway, our days are spent in the homes of musicians and artists, our nights filled with good food and song.

Living History
Edmonton’s Cobblestone Freeway Tours takes a hyper-local approach to small-group tourism in Ukraine and Eastern Europe. Guests get to the heart of the cultures and traditions, connecting and interacting with local people.

The journey begins in Lviv.
Part of the Habsburg Empire for centuries, the largest city in Ukraine’s west is a place with an opulent opera house, hidden lanes and handsome parks. Plus, a whole series of quirky, themed bars and restaurants. At one, a “coffee mine,” I descend into a series of tunnels lined with beans, a tour that finishes with a barista scorching the top of my cup with a blowtorch. At another, located up a dark flight of stairs inside a working-class apartment building, an old man answers the door in his bathrobe, teapot in hand, the room behind him looking like a tiny flat. A few steps inside reveals a concealed door that opens onto a lavish speakeasy, complete with a hipster bartender and, for some reason, a glass toilet in the bathroom, perched overtop big stacks of greenbacks.

Heading south, I’ve soon left all that behind.
“Get ready to go back in time,” says trip leader Vincent Rees as we pass through small villages with bright wooden houses, ornate orthodox churches and babushka women carrying pails of milk down the roadside. We’re briefly delayed by a funeral procession, dozens of mourners on foot, led by robed priests down the middle of the two-lane highway.

Rees explains that the cultural practices of the Hutsuls, traditionally shepherds and woodsmen, remain preserved by the remoteness of the area. “They’re mountain people,” he says. “They’re tied to their land—they don’t want to leave.”

At Kolomyia, we park near a towering Easter egg, painted in Hutsul colours. Going into the museum housed inside, I find 10,000 more, each painted with a unique pattern, with samples gathered from across the country; I learn that this legacy dates back to pre-Christian times. At Kosiv, I spend an afternoon with artist Mykola “Koka” Strynadiuk, whose living room doubles as his gallery, the walls covered in his wood carvings, which range from ancient to contemporary themes—bears, orthodox crosses and decorative plates with complex designs. Sometimes, we eat lunch at a riverside restaurant or stop at seemingly random homes, where Rees has called ahead to set up a meal, learning about small-town life while sipping homemade vodka poured from a huge, office-sized water cooler.

We learn about small-town life while sipping homemade vodka poured from an office-sized water cooler.

The time machine continues to roll.
We curl higher into the hills and reach another hilltop home—this one painted proudly in the colours of the Ukrainian flag, yellow on blue— where I meet Mykhailo Tafichuck. A well-known musician, he’s toured neighbouring countries and played shows in New York City. Today, he invites our small group to sit on couches and beds in his humble house, while he plays a series of traditional wooden instruments that he’s made himself, a pot of something cooking just behind him on an old-school brick stove.

There’s a series of sopilka, flutes of various sizes, as well as the koza, a Ukrainian take on the bagpipes, which Tafichuck plays with gusto, the sound filling the small room. And then the trembita, one of the world’s longest instruments. Some are as long as three metres—I didn’t take a measurement, but his seems to stretch clear across the house. When he plays it, the thing sounds like a half-dozen trumpets blown in unison. But when I give it a try, the wooden alpenhorn emits a sound similar to a tortured elephant.

Tafichuck plays us off, strolling behind the group with a violin, the strains flowing down to the valleys below, and we travel across the bald mountains to meet Yaroslav and Svitlana. After a dinner that stretches on for hours, Yaroslav gets out his guitar and we learn some folk songs.

Then, the dancing. Big, methodical moves with a shepherd’s axe in hand, the ultimate Hutsul symbol. And finally, the costumes—I didn’t get the full story on their significance, but they were beaded and colourful and handmade by a woman in the village. The trip drawing to a close, city lights await us too soon. But for now, I’m happy to put on my vest, take up my axe and learn a few more steps. 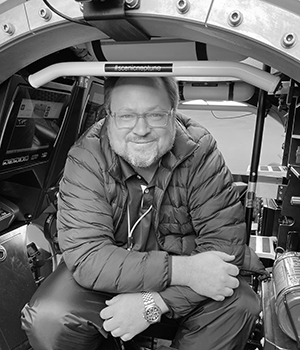